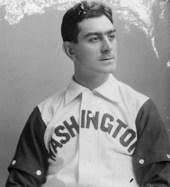 Joe Sullivan played four seasons in the National League. Unfortunately, he died of consumption a year after his last major league game.

Sullivan was mostly a shortstop, although he played nearly 100 games in the outfield and also appeared occasionally at other infield positions. He made 222 errors in his 300 lifetime major league games at shortstop, and yet his fielding percentage wasn't that far below the league percentage.

His best years with the bat were 1894-95, when he hit .335 and .338, which sound real good until one realizes that in the lively ball era of the period, his team (the Philadelphia Phillies) was hitting approximately that as a team each year.

Sullivan is one of only two major leaguers (through 2007) to die in Charlestown, MA (which is located in the Boston area). The other, oddly enough, was Alex McKinnon, who also died young, at age 30 in 1887. McKinnon also played four years in the National League.

Joe is not to be confused with another Joe Sullivan, who played several decades later.