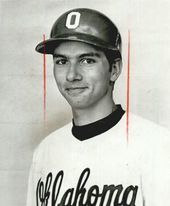 Joe Simpson is a long-time broadcaster who played nine years in the majors, getting most of his at-bats with the Seattle Mariners from 1979 to 1982 when he had between 265 and 365 at-bats each year. Primarily an outfielder in the majors, he played at all three outfield positions, with slightly more appearances in center field than elsewhere.

Simpson, born in Oklahoma, attended the University of Oklahoma in 1971-1973, the same years as pitcher Jackson Todd.