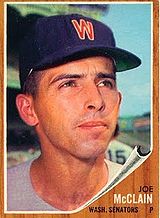 Joe McClain was all-conference in three sports in high school and still holds the state javelin record, partly because the sport was eliminated.

Joe injured his arm before he made it to the majors, and as a result was 5 - 7 mph slower at the major league level than he had been in the minors. The injury eventually finished off his career.

Source: Joe McClain and Science Hill High School which has several baseball cards and a photo of him.