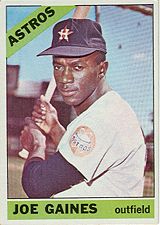 He had his best year in 1963, posting numbers of .286/.381/.476 for the Baltimore Orioles. He was primarily a left fielder; the regular left fielder that year was Boog Powell.

After baseball he became a clothing salesman.