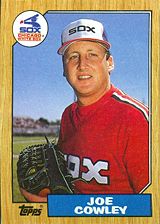 Joe Cowley threw the only shutout of his career on August 3, 1984 as a member of the New York Yankees against the Cleveland Indians. He gave up 3 hits, walked 2 and struck out 2. He later pitched a no-hitter against the California Angels on September 19, 1986, with the Chicago White Sox, allowing a run due to seven walks, winning 7-1. Earlier that season, on May 28th, he set an AL record by striking out the first seven batters he faced against the Texas Rangers; this was matched 30 years later, in 2016, by another White Sox pitcher, Carlos Rodon.

Joe finished the 1986 season with a record of 11-11, 3.88 in 27 starts, one year after going 12-6, 3.95 in 30 games for the Yankees in 1985. He seemed poised for a breakout but it all came tumbling down quickly. As spring training wound down in 1987, Joe was traded to the Philadelphia Phillies on March 26th for Gary Redus. The Phils were counting on him to anchor their rotation, but he was awful, losing all four of his starts with an ERA of 13.91 in 11 innings. He made one final appearance, in relief, on May 3rd, but gave up 3 runs in 2/3 of an inning, ending his big league career. In the process, he became the only pitcher in MLB history to never win another game after tossing a no-no.