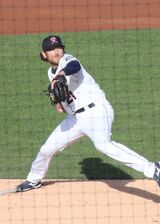 Pitcher Jimmy Yacabonis had a rough major league debut for the Baltimore Orioles against the New York Yankees on June 11, 2017. He entered the game in the 7th inning with the Orioles already trailing, 10-3, and proceeded to give up four runs on a couple of walks, a double by Aaron Hicks and a homer by Aaron Judge. He recorded his first win on September 1st when the Orioles defeated the Toronto Blue Jays, 1-0, in 13 innings. Two days later, he recorded win number 2 in similar circumstances, this time pitching a scoreless 12th inning against the Jays before the O's scored in the bottom of the inning for a 5-4 win.