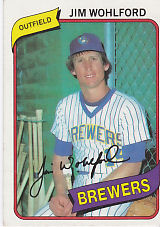 Jim Wohlford played 15 seasons in the big leagues. His first eight years were in the American League while his last seven were in the National League. In 1978 Jim hit .297 for the Milwaukee Brewers in the AL, while in 1984 he hit .300 for the Montreal Expos in the NL. Wohlford was primarily an outfielder, and mostly played left field. Often used as a backup, he had 500+ at-bats once in his career and 300+ at-bats two other times. He stole 89 bases in his career but got caught 68 times. His peak stolen base total was in 1976 when he had 22 for the Kansas City Royals.

Following his career, he has worked as a financial planner in Visalia, CA.