Jim O'Neill is the brother of Jack O'Neill, Mike O'Neill, and Steve O'Neill. Jim is listed as the regular shortstop for the 1920 Washington Senators. He was five years younger than teammate Walter Johnson. He came back to the Senators in 1923 for 23 games.

Jim wasn't in pro ball in 1921-22. The SABR biography of Steve O'Neill says that Jim's career was shortened because of injuries, so perhaps he was injured in 1921-22. An article [1] refers to a benefit being held for Jimmy as he was stricken with pneumonia and hadn't been able to play since then. 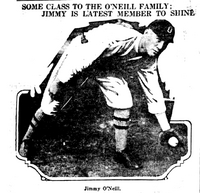