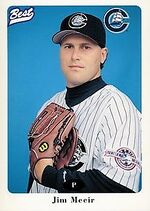 Jim Mecir was a right-handed pitcher who was drafted by the Seattle Mariners from Eckerd College in the 3rd round of the 1991 amateur draft. He announced his retirement on October 2, 2005, following the Florida Marlins' last game of the season.

In 2003, Mecir received the Tony Conigliaro Award, given annually to the player who most effectively overcomes adversity to succeed in baseball. Mecir was born with two club feet; despite several childhood surgeries that enabled him to walk, he was left unable to properly push off the rubber with his right foot. He was forced to develop an unorthodox delivery that gave him an unusually violent screwball. He was one of the last screwball pitchers active in the major leagues, as the pitch is largely being phased out due to the stress it causes on pitchers' arms.