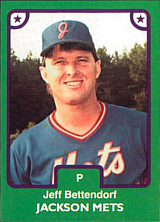 Jeff Bettendorf saw his lone big league action after being selected by the Oakland A's from the New York Mets in the 1983 Rule V Draft. He made three decent appearances, comprising 9 2/3 innings, with an ERA of 4.66 and 5 home runs allowed. He returned to the Mets and pitched professionally until 1987, finishing with the Southern League champion Birmingham Barons. He is now a Regional Manager for Coach Retail Stores.