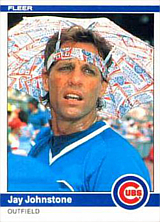 "What makes him unusual is that he thinks he's normal and everyone else is nuts." - Danny Ozark about Jay Johnstone

"Johnstone was a completely zany, off-the-wall character, who simply loved to play practical jokes on his unsuspecting teammates." - Dodger Profiles

"One of the game's greatest fourth outfielders." -Phillies Nation

Jay Johnstone survived 20 years in the majors primarily as a backup, with 500+ at-bats in only one season and 400+ in only one other season. He was a New York Yankees broadcaster from 1989 to 1990 and a Philadelphia Phillies broadcaster in 1992 and 1993.

Johnstone signed in 1963 and came to the majors in 1966 with the California Angels, a team on which Willie Montanez was also a rookie. Jay spent five years with the Angels, getting as few as 115 at-bats and as many as 540 at-bats in a season. After that, he would never spend five full seasons in a row with another major league team.

He was traded after the 1970 season to the Chicago White Sox, and hit only .188 in 1972. After being released at the end of 1973 spring training, he caught on with the Oakland Athletics. The St. Louis Cardinals bought him in early 1974 but released him before the end of spring training and he signed with the Philadelphia Phillies, for whom he would play four seasons and part of a fifth before being traded in midseason 1978 to the New York Yankees, with whom he appeared in the 1978 World Series (the Phillies won their division in 1976, 1977 and 1978, and he appeared in postseason play with them in 1976 and 1977). On April 15, 1977, he was the first player to bat in Stade Olympique, leading off the game for the Phillies against the Montreal Expos and pitcher Don Stanhouse.

After a half season with the San Diego Padres in 1979, he signed with the Los Angeles Dodgers and spent 1980, 1981 and a bit of 1982 with them before being released in May. He appeared with the Dodgers in the 1981 World Series, going 2-for-3. The Chicago Cubs picked him up in June of 1982 and he spent the rest of that season as well as 1983 and 1984 with them, but did not appear in the 1984 NLCS because he was released in September. He had been mainly used as a pinch-hitter with the Dodgers, but in his first year with the Cubs, 1982, he played almost regularly and hit surprisingly well for a player thought to be washed up. He went back to being a backup the next two years, though.

Finally, he signed again with the Dodgers in 1985, and spent that season with them, being little used. His last major league appearance was in the 1985 NLCS.

While Reggie Jackson attempting to assassinate the Queen may be the most prominent cameo during a fictitious Angels/Mariners battle in the 1988 comedy The Naked Gun, Johnstone also pops up in the film's game sequence, leading off the game for Seattle as Lt. Frank Drebin (Leslie Nielsen) assumes the identity of the home plate umpire. Johnstone never suited up with the M's in reality.

He passed away in September 2020 at age 74, a victim of COVID-19; he had been suffering from dementia for several years.