Jason Rees has played baseball in Australia, the United States and Israel and is slated to go to the Netherlands for 2008. 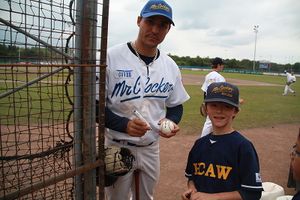 Jason was on the Australian team in the 2001 Asian Junior Championship. He spent time with the Australian Major League Baseball Academy while in high school. Rees spent four years in US college ball and earned a degree in physical education. He played in the New South Wales Major League's Central Coast Marlins. In 2007, he helped the Bet Shemesh Blue Sox win the Israel Baseball League title. He hit .362 and stole 14 bases while leading the IBL in home runs (17) and RBI (50). He signed with the New York Yankees in October 2007 but was released in March without making it to the minor leagues. For 2009, he signed with HCAW. He debuted on Opening Day, hitting third and manning center field. He had a fine start, going 3 for 5 with a homer, 2 runs and 2 RBI to lead HCAW to a 7-1 win over RCH.