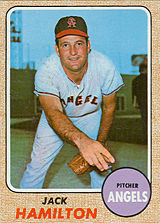 While playing for the California Angels on August 18, 1967, Jack Hamilton threw a pitch that struck Tony Conigliaro in the face and nearly killed him.

He hit a grand slam home run on May 20, 1967. This was his only home run in the major leagues. He did not fare well on the mound that day for the New York Mets, pitching 3 innings, giving up 4 hits, 4 earned runs, walking 2 and striking out 2. The grand slam was hit off Al Jackson. Overall, Hamilton only had 16 hits in 150 career at bats for a .107 average. The Mets lost to the St. Louis Cardinals, 11-9. Hamilton was not involved in the decision. Interestingly, both Hamilton and Jackson were born on Christmas day.

He was always a pitcher with control issues. As a rookie with the Philadelphia Phillies in 1962, he went 9-12 and led the National League in both walks (107) and wild pitches (22).