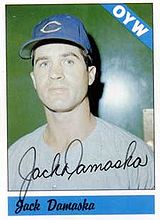 Jack Damaska played only 5 games in the major leagues but had a long minor league career. He was signed by the St. Louis Cardinals in 1957, and as late as 1973 was playing with the Quebec Carnavals. He was also a minor league manager with the Kinston Expos in 1974.

His five games in the majors were all in July of 1963, with the Cardinals. He appeared in the field only twice, once at second base and once in the outfield. Second base on the Cardinals was owned by Julian Javier during all of the 1960s, while the shortstop at the time was Dick Groat and the third baseman was Ken Boyer. The outfield had Curt Flood, Stan Musial, George Altman, and Charlie James. It wasn't an easy team to break onto.