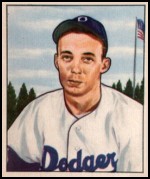 "When it [his arm] went bad in the middle of the season, it didn't hurt. It just didn't have any life to it. I didn't have the good fastball any more. And I was throwing in the dirt, which was highly unusual. Used to be, when I'd get wild, I'd be high. But I ruined my record in '50 when I lost two games in two days. I started one of them and lost it, and they put me in relief the next day and I lost it. And then I lost one other one, and then they sent me back to Montreal, which really didn't do me any good, because I couldn't throw there either. But I finished the season at Montreal, and the next spring when I went to camp it was so sore I couldn't throw at all. Course in those days, they didn't have athletic doctors. They assumed it was some kind of a tendonitis type thing. And I never came back. To this day I can't throw a rock. Still hurts in the same place." - Jack Banta, talking about the end of his big league career in Peter Golenbock's Bums: An Oral History of the Brooklyn Dodgers

Sidearmer Jack Banta had cups of coffee with the Brooklyn Dodgers in 1947 and 1948. Highly touted and sporting a blazing fastball, he went 10-6 for the club in 1949 and was the winning pitcher in the final game of the season, the Dodgers' pennant-clinching game. Banta made three appearances in that year's World Series. Hampered by chronic arm problems, he never returned to the majors after the 1950 season. After his playing career ended, Banta spent time as a minor league manager before returning to his hometown and working for a grocery store for 33 years. He died in 2006 at age 81.