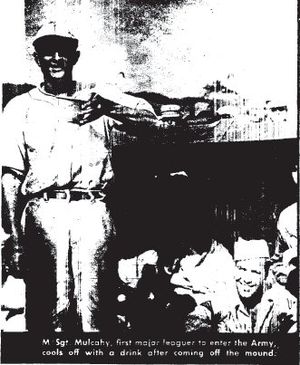 Pitcher Hugh Mulcahy lost 76 games over four seasons with the Philadelphia Phillies and earned the nickname "Losing Pitcher". He was the first major leaguer to be drafted during World War II in March 1941. He served in the Army for more than four years, being discharged in August 1945. After the war, he returned to the Phillies for two seasons and then pitched briefly for the Pittsburgh Pirates. Once his playing career ended, he became a scout and pitching coach for the Chicago White Sox. He managed the 1963 Middlesboro Cubsox and 1964 Clinton C-Sox.

Mulcahy pitched 9 seasons in the majors, and never once had a winning record.