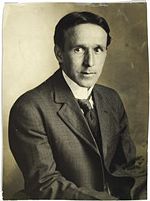 Fullerton was one of the founders of the Baseball Writers' Association of America, in 1908. He was a posthumous recipient of the J.G. Taylor Spink Award for meritorious contributions to baseball writing, in 1964. He was the third recipient of the award: J.G. Taylor Spink, the eponymous first recipient, died shortly after being honored in 1962, and the second winner, Ring Lardner, was also named posthumously. The practice of honoring still-active writers did not start until later.

Fullerton's son, Hugh Fullerton Jr., was a writer for the Associated Press for 38 years.

This page is in need of some additional content. Please help the Bullpen by expanding it, or learn how to contribute.
Retrieved from "https://www.baseball-reference.com/bpv/index.php?title=Hugh_Fullerton&oldid=1168881"
Categories: