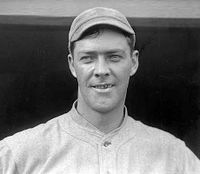 Forrest "Hick" Cady was a catcher on three Boston Red Sox championship teams, batting a career best .278 while splitting time with Pinch Thomas on the 1915 championship squad. He missed making it a fourth after successive tough seasons in 1916 and 1917, returning for 34 games as a Philadelphia Phillie in 1919. He was later an umpire in the Pacific Coast League and pallbearer at the funeral of fellow umpire Harry Kane in 1932. Hick died in a hotel fire in Cedar Rapids in 1946.