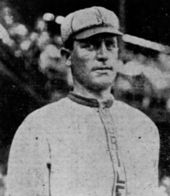 He was born on the same day as Howie Camnitz. Both Swacina and Camnitz played approximately 320 games in the big leagues, and for a time, they were teammates on the Pittsburgh Pirates.