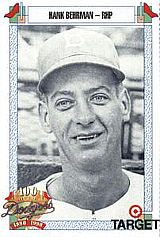 "Hank Behrman was kind of a kook. In those days it was a big thing to give a player a day, present him usually with a car, golf clubs, and gifts, and some friends of Hank decided to give him a day. They put shakers in all the saloons around Ridgewood and Williamsburg and they collected enough to buy a $100 savings bond that cost maybe $75. It's enough to know that Behrman was involved in a paternity suit, and comes this Saturday afternoon, there was to be a big presentation from the Ridgewood saloon, and the guy says 'Hank, we want to give you this.' And Hank figures it's the registration to a car or something big, and Hank opens it and says, 'What's this?' The guy says 'It's a bond.' Behrman says, 'You mean it's a lousy $100 savings bond?' The guy says, 'Well, geez, Hank, that's all we were able to collect.' Hank says, 'What the hell do I want with this?' and he throws it down and stalks off, leaving the saloon guy to pick up his lousy bond. The whole ballpark is watching this, trying to figure out what's going, and Tom Meany, who was working for the Star, says, 'I don't know what the hell he was so upset about. He's lucky it wasn't a summons.'" - Harold Rosenthal, New York Herald Tribune writer, from Peter Golenbock's Bums: An Oral History of the Brooklyn Dodgers

24-year-old Hank Behrman made his major league debut on April 17, 1946 for the Brooklyn Dodgers with a 4-2 win against the Boston Braves. He appeared in 47 games (second most appearances by a pitcher in the National League that year) and compiled an impressive 11-5 record with a 2.93 ERA. He was two years younger than Pee Wee Reese. Most of his time in the majors was spent with Brooklyn and he appeared in the 1947 World Series.

Behrman started in the minors in 1940, entered the United States Military on October 5, 1942, and was discharged on January 30, 1945. After his major league days, he pitched several more years in the minors.