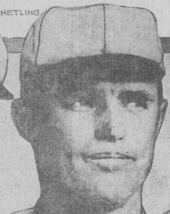 Gus Hetling played briefly in the majors for the 1906 Tigers as well as thirteen years in the minors. The heart of his minor league career was spent in the PCL, mostly with Oakland.

Hetling was 20 when he made his major league debut, one year older than rightfielder Ty Cobb.

In 1910 he was with the St. Louis Browns, but was released in April without having made a major league appearance with them.