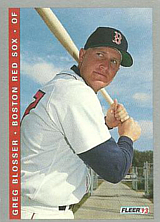 Outfielder Greg Blosser was the older brother of Doug Blosser, a minor leaguer who was killed in a car accident at age 21. Greg was selected by the Boston Red Sox in the first round of the 1989 draft. He led the Carolina League with 18 home runs and was named the league's top prospect by Baseball America. He saw brief big league action with the Sox in 1993 and 1994.