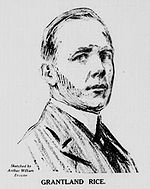 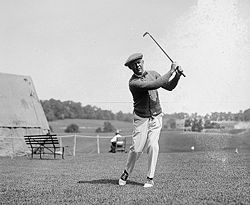 Grantland Rice wrote some of the most famous sports prose. Although he died a half century ago, his words endure today.

A graduate of Montgomery Bell Academy and Vanderbilt University, Rice worked for several papers in the south before going to New York, NY. In New York he worked for the Evening Mail, Herald-Tribune and the Daily News. At the New York Evening Mail he worked with Franklin Pierce Adams, the author of Baseball's Sad Lexicon.

Rice gained fame in 1924 when his column in the Herald-Tribune referred to Notre Dame's backfield as the "Four Horsemen of the Apocalypse". The next year, he began selecting the Walter Camp All America Team after Camp himself had died. He wrote a nationally syndicated column beginning in 1930.

Rice's contributions to baseball are wide ranging. In addition to hundreds of columns about the great game, Rice promoted a young outfielder in the Atlanta Journal-Constitution in 1904 and 1905. This outfielder was Ty Cobb. In 1908, Rice was the coach at Vanderbilt University.

In 1921, Rice made the first radio broadcast of a World Series game. He also called the first complete World Series in 1922. In 1923, he partnered with Graham McNamee but walked away from the job after a couple of games. As a broadcaster, his style was to describe in very brief terms the action that had just happened after it had been completed, and to leave dead air in between plays; McNamee in contrast invented the canonical play-by-play form, which consists in describing the action as it happens and filling any dead air with observations about the setting, possible strategy, etc. The two styles were incompatible, and Rice realized quickly, when working with McNamee, that he was a man of the written word and that he should leave broadcasting to those for whom it came naturally. From 1946 to 1953, Rice sat on the Hall of Fame's Old Timers Committee, a precursor to the Veterans Committee.

In 1966, Grantland Rice won the J.G. Taylor Spink Award from the Baseball Hall of Fame. His last typewriter is on display in the Hall's library.

It was Rice who wrote: "It's not whether you won or lost but how you played the game."