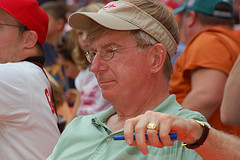 George Will is a syndicated newspaper columnist whose primary focus is politics but who has occasionally written about baseball and especially about the travails of being a fan of the Chicago Cubs. He penned a book on the subject, Men At Work (ISBN 0-02-628470-7), which includes the line that umpires should be "natural Republicans — dead to human feelings". In 2014, he published A Nice Little Place on the North Side: Wrigley Field at One Hundred, a paean to Wrigley Field.

Will is noted for his right-wing politics, once stealing a debate book from the Jimmy Carter campaign to help Ronald Reagan in the 1980 presidential debates.

On March 15, 2011, George Will was appointed as one of 12 members of the Baseball Origins Committee.