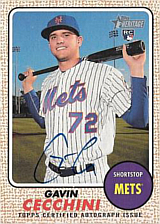 The brother of Garin Cecchini, infielder Gavin Cecchini was selected by the New York Mets in the first round of the 2012 amateur draft with the 12th overall pick. He soon signed and made his pro debut for the Kingsport Mets on June 19th. Gavin won the Cecchini boys sweepstakes of most middle names as well as most big league time, trumping Garin's 13 games with 36 games split between 2016 and 2017 with the Metsies. But Garin won the best big league batting average sweepstakes, batting .229 in 35 at bats, trumping Gavin's .217 in 83 at bats.