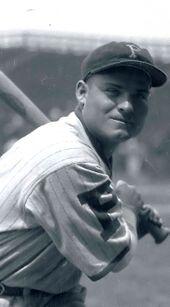 Frank Sigafoos played 55 games in the major leagues with four teams in three seasons. He came out of Purdue University, where he had attended from 1923 to 1926, and broke into the majors in September 1926. He was a consistent hitter in the minor leagues, with a .313 batting average and 2,003 hits.

1933, in which he hit .370 with 53 doubles for Indianapolis in the American Association, was his best season. In 1934, though, his batting was so weak early in the season that he was benched for a time. When Razor Shines was honored by the Indianapolis team with a day in his honor, it was reported that Shines and Sigafoos were the only two players to have been so honored.

Sigafoos hit no home runs in the majors, but on April 21, 1929, playing for the Detroit Tigers, when he hit a ball into the stands, the homer was nullified by the umpire because the pitcher had balked. Under today's rules, the home run would have been allowed.

Frank played for 15 teams in his career.