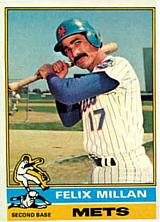 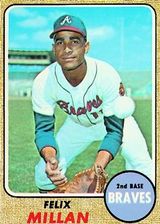 Always one of the toughest men in baseball for a pitcher to strike out, the Puerto Rican Félix Millán was an excellent handler of the bat who was frequently among the leaders in sacrifice bunts. He served in the US Army from 1960-1962. He was signed by scout Félix Delgado. Playing for the Atlanta Braves and New York Mets, Millan would use a small bat and choke way up on the handle in order to make contact. An excellent fielder, Millan also managed a career .279 batting average.

Millán was the first Atlanta player with a six-hit game, doing so in 1970; Willie Harris would follow 37 years later. On July 21, 1975, Felix figured in the setting of an unusual record. Joe Torre, playing third base for the Mets, grounded into four consecutive double plays. Millan preceded each Torre double play with a single and was the front half of each of the four consecutive twin killings.

After his playing career in the US ended, Millan played for the Taiyo Whales from 1978-1980. In 1989, he played for the St. Lucie Legends of the Senior Professional Baseball Association. He hit .269 in 31 games with the team. Félix also played for the Caguas Creoles of the Puerto Rican Winter Baseball League.