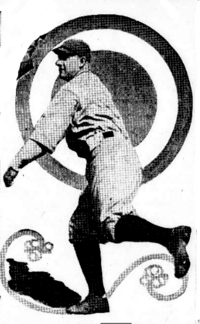 Eddie Eayrs graduated from Brown University in 1916 after having attended previously from 1909 to 1913. He later became Brown's baseball coach from 1942 to 1948.

Eayrs was both a pitcher and an outfielder. While he came up in 1913 solely as a pitcher, in 1920 and in 1921 he both pitched and played outfield. As a pitcher he was not particularly effective (except in his first brief cup of coffee, and even then he gave up several unearned runs), but as a hitter in 1920 he hit .328 and had a .410 on-base percentage. Although it was the lively ball era, the 1920 Boston Braves hit only .260, and Eayrs was the only player on the team who hit over .300.

Only two major league players have been born in Blackstone, MA. The other is Con Daily.