Note: This page is for 1980s catcher Ed Hearn; for infielder Ed Hearne who played in 1910 and is sometimes called Ed Hearn, click here. 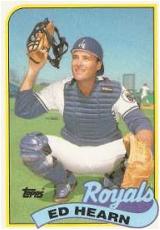 In his eighth year as a pro, Ed Hearn became the backup catcher for the New York Mets on their 1986 championship team. The following spring, he was part of a trade with the Kansas City Royals that brought David Cone to New York, as the Royals wanted to make him their starting backstop in 1987. Unfortunately, Ed suffered a shoulder injury and his major-league career ended in 1988, though he remained in the minors through 1990.

The following year he was diagnosed with serious kidney disease and has battled nobly with an assortment of health problems since then. He wrote an inspirational book called Conquering Life's Curves. He also serves as a motivational speaker and has a foundation devoted to this work.