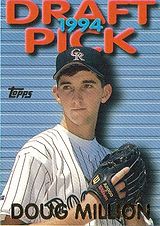 Million was assigned to the AZL Rockies and went 1-0 in 3 starts, striking out 19 batters in 12 innings, while walking 3 and allowing 8 hits. He had a 1.50 ERA and was quickly promoted to the Bend Rockies. In A ball, Million went 5-3 with a 2.34 ERA in 10 starts, though he struck out only 41 in 52 innings while walking 26. He was named the #3 prospect in the league in a poll of Northwest League managers. Baseball America named him the top prospect in the Rockies organization.

In 1996 the 20-year-old pitcher went 7-5 with a 2.53 ERA for Salem and struck out 99 in 107 innings, while allowing just 84 hits and cutting his walk total to 60. League managers picked him as the #6 prospect in the circuit, Baseball America rated his breaking pitch as the best in the league and he was promoted to the Eastern League. For the New Haven Ravens Million went 3-3 with a 3.15 ERA in 10 starts. He fanned 40 and walked 40 in 54 innings. Doug was rated the #8 prospect in the Colorado organization at year's end. He went 2-3 with a 3.27 ERA in the 1996 Hawaii Winter League, finishing 5th in ERA, second among American performers.