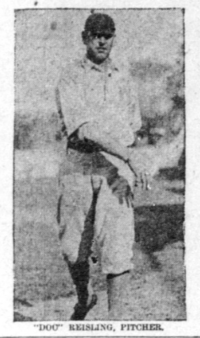 Frank "Doc" Reisling pitched in the majors in 1904 and 19005 and again in 1909 and 1910. A number of sites state that he was a pitcher/dentist and this site says that his major league career was interrupted by illness.

The Sporting Life of March 12, 1904 carries a major article on a reserve clause dispute involving him.

The book Muzzy Field: Tales from a Forgotten Ballpark states that he won 23 games for Bristol in 1901. The book spends a paragraph on his early years as a two-way player who could both hit and pitch well during stints in several leagues in the late 19th Century. The book states he worked his way through Ohio Medical College.

Reisling is the key protagonist in an article called "Let's Play Three" in the SABR magazine The National Pastime # 23 (2003). Doc, who was managing Tecumseh in 1914, managed to schedule a tripleheader in an effort to win the pennant. The stratagem didn't work, however, due to the league president invalidating the third game.