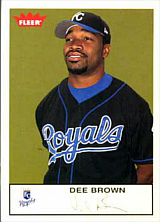 After his organized baseball days, Dee signed with the Seibu Lions for 2010. On Opening Day, March 20th, he hit 5th and played DH. He was 1 for 3 with a RBI versus Yoshihisa Naruse. On April 4th, he went deep off Masaru Takeda for the 90,000th home run in Nippon Pro Baseball history. He spent parts of two seasons with Seibu, contributing a .230/.311/.407 line and 21 homers.

After his playing career ended, in 2016 Brown founded Dee Brown Baseball to work with young players. Brown returned to the professional baseball ranks in 2020 when the Pittsburgh Pirates hired him as the bench coach of the Bristol Pirates before the minor league season was cancelled due to COVID-19.