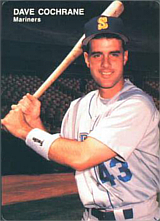 Dave Cochrane was a 4th round pick in 1981 by the New York Mets and scout Roger Jongewaard. He batted .235 in 218 games over parts of five seasons, primarily with the Seattle Mariners. Dave is one of the very few players to have significant playing time both at catcher and shortstop during his career, playing 39 games at shortstop and 43 at catcher. He never played them in the same game but did catch on August 2, 1989 and play shortstop on August 3, 1989. The only positions he did not play in the bigs were pitcher and center field.