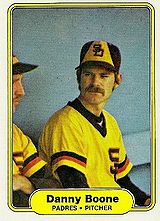 Dan Boone pitched for the San Diego Padres and Houston Astros in 1981 and 1982. In 1990, he came back to the majors as knuckleballer with the Baltimore Orioles.

In 1989, he joined the Bradenton Explorers of the Senior Professional Baseball Association. He went 4-3 with a 3.16 ERA and was offered a contract with the Orioles. He appeared in 4 games with the O's in 1990, eight seasons after his previous big league appearance. In 1990, he became the only player to play in the Senior Professional League, the MSBL, an adult amateur league, the minors and the majors. Also in 1990, Boone returned to the Senior Professional Baseball Association in the fall and played for the Daytona Beach Explorers; he pitched in 7 games and was 5-1 with a 1.85 ERA and a complete game shutout. Boone's 5 victories were leading the SPBA when the league folded.

He is a descendant of the 18th-century pioneer Daniel Boone.