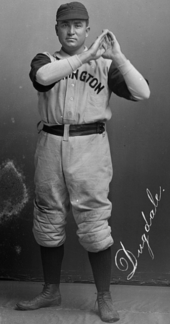 Dan Dugdale had a prominent career in baseball and real estate. As a ballplayer, he was in the National League in 1886 and 1894. His professional career started in 1884 and he played for numerous clubs between 1884 and 1894. Starting in 1895 he became a manager and co-owner, and he was involved as a manager, owner, or executive during much of the rest of his life. The main stadium in Seattle, WA, Dugdale Field, bore his name for many years. He also served as a Washington State legislator.

He made a lot of money speculating in Seattle-area real estate.

Source: Dan Dugdale. The site has photos of Dugdale as a player and much later as a portly owner.

He was often called Ed Dugdale. He died from injuries he sustained when a truck hit him.