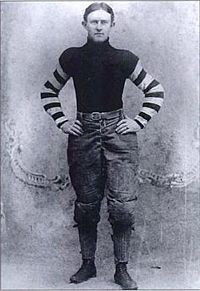 John "Daff" Gammons was in 28 games for the Boston Beaneaters of 1901, who were managed by Frank Selee. Daff primarily played left field.

Playing baseball didn't seem to be his main interest. He already owned a successful insurance firm by the time he got to the majors, and almost quit baseball to focus on the business. He also played professional football and competed in amateur golf tournaments. He led a team of investors to purchase the International League's Providence Grays in 1917 and became the team president. He served as assistant coach for Brown University's baseball team for many years, occasionally also being head coach, and also coached football there. He owned a farm in later years.

Gammons attended both Brown University and Harvard University during the years 1895-1900. He was a baseball and football star, with Dave Fultz his teammate on the gridiron, and in 1896 the baseball team was national champion.

Christy Mathewson and Daff played professional football as teammates one year. Mathewson later came to Brown one year to coach the Brown pitchers for Gammons.