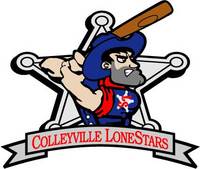 The Colleyville LoneStars were a Summer Collegiate Baseball team playing in the Texas Collegiate League. The LoneStars debuted in 2004 as the Colleyville-Grapevine LoneStars, one of the founding teams of the TCL, and play their home games in Colleyville, TX. The LoneStars suffered financial constraints in their first season and were forced to relocate to Euless, TX in 2005. With new ownership, the Euless LoneStars returned to Colleyville for the 2007 season. Following the season, Gerald Haddock (owner of the Texas Collegiate League), sued the Colleyville Lone Stars and it's ownership group, Stacy Hollinger and Britt Britton. The case has never proceeded and the Lone Stars have not taken the field since the suit was filed.

The LoneStars, like every other Summer Collegiate Baseball organization, are dedicated and designed to provide minor league-style competition for NCAA players that wish to continue on into professional baseball. The Colleyville LoneStars operate in the model of a Minor League team: playing nightly before fans in stadiums which seat thousands, using wood bats and minor league specification equipment, and experiencing road trips between games. The LoneStars actively recruit players and athletes are unpaid in order to maintain their NCAA eligibility, and live with host families in the same manner as Single A and Independent League players.