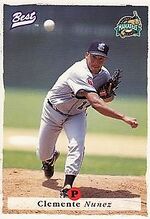 Clemente Nunez is a former pitching prospect who was the first player ever signed by the Florida Marlins. He was signed at the age of 16 out of the Dominican Republic on December 16, 1991.