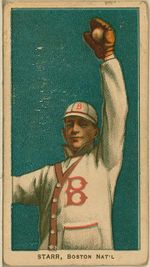 Charlie Starr played for four teams in his three-year major league career. He had most of his at-bats for the Boston Doves in 1909. However, he was traded in July of that year to the Philadelphia Phillies for Dave Shean, who finished up the year as the regular second baseman for the Doves, while Starr played in only three more games for the Phillies.

He is one of four major leaguers (through 2008) with the last name "Starr".

The February 16, 1907 issue of Sporting Life states that the Youngstown team was informed that Starr had "been awarded to it".

The March 23, 1912 issue of Sporting Life says that Buffalo released Starr to Mobile.