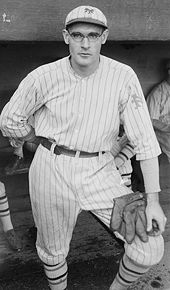 "Yes, Dorothy, the man gave your daddy a low curve on the inside this time." - Babe Ruth speaking to his daughter, after he had hit a home run off of Carmen Hill in the 1927 World Series

Carmen Hill pitched 10 seasons in the majors between 1915 and 1930. He started Game 4 of the 1927 World Series, a game in which Babe Ruth hit a home run off of him; however, Hill neither won nor lost the game as the New York Yankees scored the winning run in the bottom of the 9th off of reliever Johnny Miljus. Hill had gone 22-11 during the regular season.

Hill was born in Royalton, MN, about 75 miles northwest of Minneapolis, MN. He attended high school in Corry, PA, in the northwest corner of Pennsylvania near Erie, PA.

Meanwhile, he was having a long minor league career, winning 19 for Youngstown in 1915, 26 for Birmingham in 1917 and 21 for Indianapolis in 1926. He pitched six seasons for Indianapolis, winning in double figures each year.

One of his nicknames, "Bunker", is obvious due to his last name Hill. The other nickname, "Specs", came about because he was one of the very earliest players to wear glasses, perhaps one of the first five in the majors.

A letter published in the October 1988 issue of Baseball Digest stated that Hill was the last surviving member of the 1927 Pirates, and that he still lived in Indianapolis, IN after moving there in 1920.