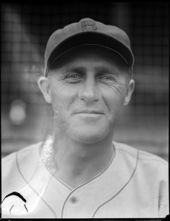 Carl Reynolds was a four-sport star at Southwestern University in Georgetown, Texas. After graduating from Southwestern, Carl coached at Lon Morris College until he was signed by the Chicago White Sox and reported to the Palestine Pals in 1927. He then made his big league debut with the White Sox on September 1st of that same year and did not play in the minors again until 1937.

In a July 2, 1930 game for the White Sox against the New York Yankees, Reynolds hit 3 homers in the first three innings. He was at the center of a famous brawl with Yankee catcher Bill Dickey at Griffith Stadium on July 4, 1932, while playing for the Washington Senators. After scoring from third base on a botched pick-off attempt by Dickey, and bowling over the future Hall of Fame catcher in the process, he was punched by Dickey and knocked clean out. His jaw was broken, and fans ran onto the field to join the ensuing brawl that almost turned into a riot.