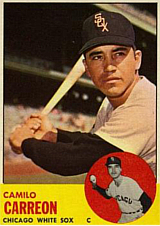 Father of Mark Carreon, Camilo "Cam" Carreon was a catcher who played most of his career with the Chicago White Sox during a time when they were always over .500. He was the team's starting catcher in 1962 and 1963, but an injury in 1964 hastened his big league departure. Although he appeared briefly for World Series-bound teams in both 1959 and 1966, his first and final seasons, during the regular season, he did not appear in either World Series. He played in the minors for clubs located in Duluth-Superior, Tucson, Portland, and San Diego.

After baseball, he worked for the Tucson parks and recreation department and was a golf course groundskeeper. He died at 50 and is buried in Colton, CA, the town where he was born.