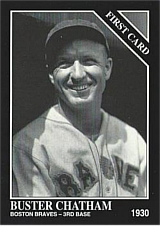 Buster Chatham belted 3,067 hits in a twenty-plus year minor league career. His big league action was brief, a pair of seasons with the Boston Braves in 1930 and 1931, in which he batted .263 in 129 games during a mammoth offensive explosion. He later managed minor league teams in three different seasons. While still a player, he was the manager, for the first part of the 1942 season, of the Pensacola Pilots in the Southeastern League. He then managed the Waco Pirates in 1948, their first season as a Pittsburgh Pirates farm team. He returned to the helm of the Waco franchise at the beginning of 1953. A tornado destroyed the team's ballpark early in the season and the team finished out the season in Longview, TX. After his managerial stints, Chatham worked as a scout for the Pittsburgh Pirates (1958-1963), San Francisco Giants (1965), Detroit Tigers (1966-1972), and Texas Rangers (1975).