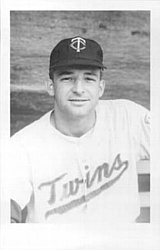 Infielder Bud Bloomfield was signed by the St. Louis Cardinals prior to the 1957 season. He was with the Tulsa Oilers from 1961 to 1963, coming to the majors for the first time in September 1963, appearing in one game at third base for the Cardinals without a plate appearance. After that season, he was selected by the Minnesota Twins in the minor league draft. In 1964, he went 1-for-7 in seven games with the Twins (including 2 starts at second base) and also played for Atlanta in the International League.