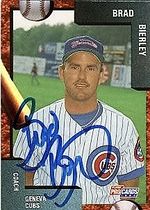 He was originally drafted by the St. Louis Cardinals in the 24th round of the 1984 amateur draft, ahead of pitcher Bob Davidson, but opted not to sign. After hitting .354/.424/.722 with 27 home runs, 75 RBI and 29 stolen bases for Pepperdine University in 1985, the Minnesota Twins took him in the fifth round of the 1985 amateur draft, a few picks after outfielder Mike Devereaux and a couple picks ahead of infielder Bobby Rose. He was signed by scout Jesse Flores.