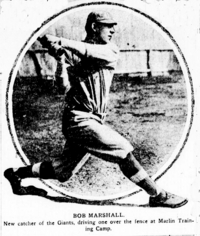 When he played baseball for the University of Minnesota, he also played first base for two years, 1904 and 1905, helping the University to win the Western Conference Championship in 1905.

Outside of athletics, Marshall practiced law as an attorney in the law office of Mr. William H. H. Franklin, and later at the well-known firm of Nash and Armstrong.

Marshall left the law offices, spending many years back on the diamonds, playing semi-pro baseball for pre-Negro National Leagues. In 1908, he played utility for the Minneapolis Keystones, then moved to first base latter in the season. In 1909, he joined the St. Paul Colored Gophers. In 1910, he split the season between the Chicago Giants and the St. Paul Colored Gophers, appearing for and managing the Colored Gophers team occasionally until at least 1916. He also played for the All Nations in 1923.

This article incorporates text available under the GFDL from the Wikipedia article: Bobby Marshall

This biographical article is missing the person's: height weight
Retrieved from "https://www.baseball-reference.com/bpv/index.php?title=Bobby_Marshall&oldid=1228948"
Categories: