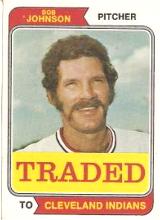 A hard-throwing righthander, Bob Johnson could never quite overcome the arm trouble that plagued his career. He pitched mostly for the Pittsburgh Pirates in the early 1970s, although his 1970 campaign with the Kansas City Royals was clearly his best overall season in the big leagues.

Johnson missed the 1968 season due to military service.