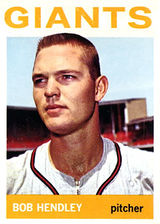 Pitching for the Chicago Cubs, Bob Hendley allowed one hit (in the 7th inning) against the Los Angeles Dodgers on September 9, 1965. Unfortunately for him, opposing starter Sandy Koufax pitched a perfect game; the game set a record for least amount of hits by two teams in nine innings. The game's lone run scored off Hendley in the 5th on a walk, a sacrifice bunt, a stolen base, and an error.