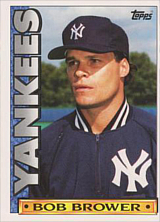 “A forgotten man with the Texas Rangers a year ago, Bob Brower finds himself competing for a starting job in 1989. The departure of Claudell Washington opens a spot in the lineup, one which Brower hopes to fill. He comes to the Yankees hungry for opportunity. Brower starts this season at age 29, with just over two years of big league experience. His time is now, and Brower is so determined he spent his winter break improving his game in the Dominican Republic. Not known for his power, Brower is more of a versatile outfielder. He can hit for average, steal a base and drive in a few runs. Brower has the credentials to help the club in a lot of ways even if he isn’t a starter, which is why he is hoping to become a valuable addition to the Yankees.” - from the New York Yankees 1989 official team yearbook

Bob was the only athlete to letter in four sports at James Madison High, lettering in baseball, basketball, football and track. He attended Duke on a football scholarship and was named ACC offensive back of the week in 1979 when he rushed for 130 yards. Since 2000, Bob has served as Vice President of the Scott Boras Corporation. Boras was Bob's agent while he was a player. After he retired, Scott asked him to work for the company.