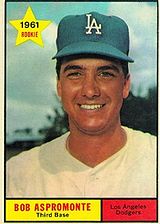 “In all my years in baseball, I have never known a player with more class than Bob Aspromonte." - Larry Dierker

Third baseman Bob Aspromonte played a dozen seasons in the majors, most notably with the Houston Astros.

The younger brother of big leaguer Ken Aspromonte, Bob attended Lafayette High School in Brooklyn, New York, the same school which produced Sandy Koufax. He signed with the Brooklyn Dodgers in July 1956, and after making his pro debut that summer with the Macon Dodgers, he made a late-season appearance in the majors. The 18-year-old struck out as a pinch-hitter facing Don Liddle of the St. Louis Cardinals on September 19th, his only appearance in the big leagues that year. After a few years of minor league seasoning, he returned to the Dodgers, now in Los Angeles, in 1960, getting into 21 games, before spending the entire 1961 campaign with the club.

Following the 1961 season, Aspromonte was selected by the Houston Colt .45's in the 1962 expansion draft with the team's second pick. He was the team's Opening Day third baseman in 1962, getting the first hit and scoring the first run in franchise history. Hitting .266 with 11 home runs that year, he also had 57 consecutive errorless games at third, at the time a National League record. He had perhaps his finest year in 1964, hitting .280 with a career-high 12 homers amd 69 RBI while leading NL third basemen with a .973 fielding percentage. After hitting .294 in 1967, he was primarily a utility player the next year, when he made headlines by refusing to play on the national day of mourning following the assassination of Senator Robert Kennedy. After the 1968 season, he was traded to the Atlanta Braves for Marty Martinez; at the time, he was the last of the original Colt .45's still with the team.

After two years with the Braves, Aspromonte was dealt to the New York Mets for Ron Herbel following the 1970 season. He led NL third basemen with a .965 fielding percentage for New York in 1971 but hit just .225 and was released by the club at the end of the year. When he hung up his spikes for good, he was the last former Brooklyn Dodger still playing.

Since his playing days, Aspromonte ran a Coors Beers distributorship for many years before retiring. He has resided in Houston for more than 50 years.

In addition to brother Ken, Aspromonte had another brother, Charles Aspromonte, who played in the minors.